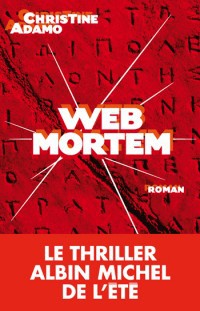 St Andrew in Scotland is the scene of several horrible murders. All the victims are people from the Middle East and without any legal paper. The local police officer would not really care if a third body was not discovered. The body of the current mistress of a young and brilliant University dean, Hammond Mac Leod.

Dr MacLeod does not seem to have had any reason to get rid of the beautiful woman he was sleeping with, let alone to mutilate her so horribly. No reason, really? Then, why does he spend so much time on this online game? Why does he refuse to answer to the investigators? Why does he run away to New York, helped by Willow Owen, a young American reporter? Does he himself really know?

Hammond realizes that a killer is hiding behind the internet. He realizes that he has to delve into the online game if he wants to be cleared. But the game is going dangerously deep into Mesopotamia's darkest and oldest history, asking to online players to designate the next victim.

And soon, Hammond and Willow are trapped in the web, in a landscape of ancient languages, in a vortex of destructive passions...

The nightmare was here, inside of him, outside of him. He was able to hear his own screams echoing from the depths of an abyss. Yelling. Screaming. But nobody could hear him. Nobody would hear him again, never. Now, his only companions were those repugnant worms which squirmed beside him.

His mind came out of darkness, vacillating.

Hammond looked around him. Perhaps he should have stay immersed in his dream, far from this infamous hole.

He tried to rise. But his arms were pulled back by the handcuffs, which were welding his wrists to the old radiator, irradiating a sharp pain in his already stiff and sore neck.

He closed his eyes, opened them immediately again, looked up.

A tiny window. A glowing light, which fell from the bulb hanging from the ceiling tiles, drowning him into a halo of purple and black, highlighting what was around him. Almost nothing. An old bucket placed against the wall, exhaling a faint acrid smell. Some dusty jars, stacked on the top of a metal shelf. The old radiator to which he was attached. The remains of a sink, abandoned on the floor, next to a metal door. Closed. Probably locked. And not a sound. Only the dripping of a liquid filtering from one of the jars into the bucket.

Hammond felt his throat tighten. He was going to die. And he knew how. Panic overwhelmed him.

He stood up, pushed himself forward.

It had to break. But the handcuffs scrapped the pipe, suddenly bringing back the prisoner, tearing the muscles of his shoulders and arms, the skin of his wrists.

Hammond fell back against the wall, trying to control his urge to scream.

He had to count.

The legs of the beasts. Or something else.

He took a deep breath, looked down toward the swarming worms. They were approaching the metal container. Hammond saw what was inside, what was attracting them.

He blinked. He had never seen this kind of worms. The rear of their bodies had a tiny tail on, which stretched and retracted at will depending on the position of the animal, as if it was telescopic. And that obviously contributed to the propulsion of the whole.

A first creature came in the bucket, passed the edge without difficulty. Fell inside.

One by one his congeners followed. But today, Hammond’s scientific curiosity was gone. He did not wish to observe them in the liquid. Anyway, from where he was, it was impossible. So he began to review mentally all the professors of the zoology’s department. Who might perorate for ten minutes on this filthy larva?

Small soft creeping thing, cylindrical and elongated, smoothly fitted with a body without limbs, without vertebrae...

Then, through the veil of purple light, he saw him, shivered. The handcuffs plunged further into his bruised wrists.

The last player was there.